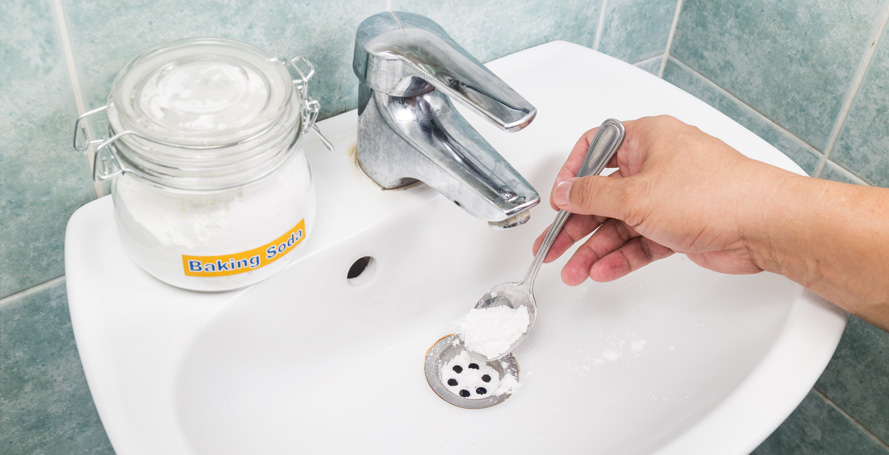 Clogged drains happen from time to time, so we tend to keep toxic chemicals on hand to remedy this problem when the situation arises. Synthetic cleaners contain sodium hydroxide or sulfuric acid, which eats away at pipes (regardless if they’re made of metal or plastic).

Such cleaners can also be a hazard for curious children and pets. Luckily there are ways to unclog drains without having to resort to harsh chemical drain cleaners. Let’s take a look at seven eco-friendly ways to unblock drains:

Before you do anything else, you’ll want to try using a plunger first (particularly if your clog is in the kitchen sink). Start by completely emptying your sink, then fill it halfway with warm tap water. Using a rubber plunger with a shallow suction cup, begin to plunge. The suction could draw out the clogging material and restore freedom to your drain’s passageway.

For this method, you’ll want to straighten the hanger out but leave the hook as is. Use the hook end to fish in the drain and pull up any food or hair buildup that is clogging the pipe’s passageway. Collect your findings in a grocery bag for easy discarding. Once you’ve removed everything you possibly can, run hot water down the sink.

Boil about two liters of water and mix in a few tablespoons of liquid dish soap. Slowly pour this mixture down the sink. This method may take several tries, but if your sink is clogged by grease, this is an amazingly simple and effective way to treat it. The heated water will warm the grease back to a liquid and then will flow right out of the pipe.

If your drain still isn’t clear after you’ve tried these methods, measure out one cup of baking soda and pour it down the drain, followed by 3 cups of boiling water. This should do the trick.

If baking soda alone doesn’t work, try the following variation, which involves vinegar. First, pour half a cup of baking soda down the drain, followed by half a cup of white vinegar. Plug your drain and let it sit for an hour. Then, unplug the drain and pour a pot of boiling water down it. Continue with this step under the drain is clear. (You can also heat the vinegar first

Start with ¼ cup of salt, ¼ cup of Borax, and then ½ cup of vinegar. Add a pot of boiling water and let it sit for an hour, or until it clears. Finally, rinse with hot tap water to clear all ingredients down the drain.

Combine ½ cup of salt with ½ cup of baking soda, and pour down the drain. Let it sit for a minimum of a half-hour or as long as overnight. (The tougher the clog, the more time it needs.) Then, clear it with a pot of boiling water.

Unclogging a drain may not exactly be a fun task, but give yourself a pat on the back for making the effort to go the natural route. Take pride in knowing that the home remedies suggested are better for your pipes, safer for your kids and pets, and healthier for the environment.